Bausch+Lomb has extended the range of their Biotrue ONEday spherical lens. It now goes from +6.00 to -12.00. 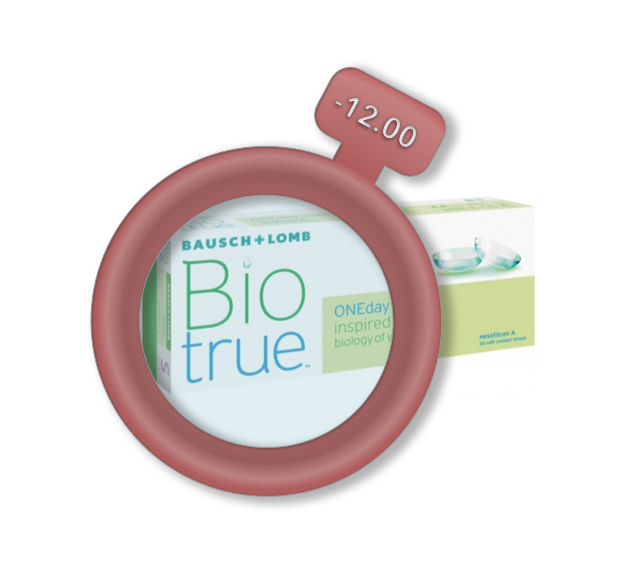 In the early 2000s, Adobe Flash was taking over the world wide web. I decided to harness Flash's awesomeness to make the first (as far as I know) optometry-themed video game. Yes, I had a lot more time on my hands back then :).  Still, it was a good reason to try Flash development and lead to me creating a lot of Flash-based tools for EyeDock. In fact, even the contact lens searches were totally Flash-based at one time.
Flash, of course, started going the way of the dodo 10 years ago when the iPhone was introduced. Most Flash-based websites, including this one, have all but transitioned to technologies that meed modern standard and are compatible with mobile platforms.
So, before Flash is totally dead, I thought I'd re-introduce Oculus Invaders so it can be enjoyed for the last time.
Use the menu in the upper left-hand corner of the game to play. You'll probably have to enable Flash in your browser for this to work, and it won't work on mobile platforms.
Oh, by the way, I originally had this game connected to a server and a database to store high scores, etc. Since I just stuck the game on this website, but without all the server-side and database connections, it kind of hangs up at the end. To replay just refresh your browser.

I’ve added a new calculator to EyeDock that can determine the power in any meridian of a pair of spectacle lenses.

It's located here, along with some accompanying text describing why such calculations might be useful (one of which includes insurance coverage for medically necessary contact lenses).

However, I wanted to expand a bit on how this calculation is done, and how the power in a meridian can be estimated if needed.

First of all, getting the exact measurement of a meridian’s power is not difficult if you have the formula:

Keep in mind that the theta (θ) value only needs to take into account the shortest distance between the cyl axis and the meridian of interest. For example, if our spectacle power is:

So, the rule of thumb is this: If you take the difference between the two angles and it’s bigger than 90º, subtract this number from 180º.

As another example, what is the difference between 150º and 10º?

Since this result is greater than 90, subtract it from 180:

So, the closest difference between meridian 10º and meridian 150º is 40º. To be honest, it’s probably easier to visualize this on an optical cross than to do it mathematically:

But I Can’t Remember Formulas!

So, what happens if you’re shipwrecked on a desert island and your survival depends on calculating a lens power in a specific meridian and you just can’t remember the above formula? Well, fortunately, this is actually pretty easy to estimate.

Let’s consider a spectacle Rx of:

And let’s suppose we want to know the power in the 180º meridian.

When thinking through optics calculations, I sometimes like to think of the Rx as split into a spherical component plus a cylindrical component, like this:

For now, we can focus on the cylindrical component because this is the only where the power varies by the meridian (in other words, the spherical component isn’t very interesting because it has the same power in every meridian).

And what do we know about cylinder power? Well:

There is zero power at the cylinder’s axis, which is at 30º in this example.

For everything else, we can estimate the amount of cylinder as being proportional to how far you are in between these two meridians.

Now that we know how much of our cylinder power is located at this meridian, we can add back in the spherical component of Rx:

That’s not exactly what we get when we use the formula, but it’s pretty darn close.

I wanted to write a little note about some new features I've added to the contact lens searches in the last couple weeks.

As a side note, this is something I'm really horrible at doing: I'm constantly tweaking and adding things to EyeDock, but then I forget to tell people about them. I like to spend my time doing the things I enjoy, which is building new features. I have to spend time doing things I don't particularly enjoy, which is keeping data up-to-date and answering support emails. Everything else always seems to fall be the wayside, which pretty much means everything related to business and marketing.

So, with that in mind, I'm going to share some new features that you probably wouldn't notice unless you happen to stumble upon them.

Distance Center or Near Center data for multifocal contact lenses.

For years, I've been kicking myself for not including database fields for categorizing soft multifocals by distance-center or near-center. As I've read more and more about how these designs factor into myopia control, I realized it's something I really needed to address. So, I added these fields to the database, wrote code to search by  them, and went through all the bifocal lenses and populated these values wherever I had the information.

So, to search by this field, go to the contact lens searches, select the "More options", and then select "Bifocal Center" in the "even more options" dropdown.

As always, you can combine this with any other search criterion. So, for example, you could search for daily disposable distance-center bifocal lenses or silicone hydrogel near-center lenses or anything else you want.

While I was at it, I added several other database fields that I felt were long overdue, including:

As a result, you can search for lenses by these factors now too.

I call the search bar at the top of the page the "Universal Search" because it has a TON of built in functionality. For one, it can be used to search all the databases: Soft Lenses, GP lenses, and Topical ophthalmic medications,and even link to  external sites for things like ICD-10 searches. However, there are a lot of features that I'm sure have flown under the radar.

For soft lenses, you can search by:

2. Abbreviations. For example, type "AOFA" as a quick way to search for "Acuvue Oasys for Astigmatism"

3. Search by company. For example, typing "Alcon" will let you see all of Alcon's lenses.

4. Keyword searches. This is fairly new, but the search will now recoginze a bunch of keywords. Some examples would include:

And many combinations of these things, such as toric bifocal high dk lenses:

Well, that's all I'll share with you today. There are a lot more things I should probably share with you, though, so I'm going to have to try to push out a few more posts like this so one. I need to make sure you're using EyeDock to it's fullest potential!

It was brought to our attention yesterday that we had an error in our Pazeo listing. The recommended pediatric dosage for this medication is 2 years. Our listing incorrectly listed it as 2 months.

We completely understand the significance of such an error and truly regret that it happened. These listings are manually, but very carefully, entered into our database by us. They are double and triple checked, but this mistake managed to slip through our evaluation process. We apologize for allowing this to happen and will increase our efforts to prevent something like this from happening again.