I've had a contact lens calculator on EyeDock for nearly 10 years now, and overall it's been very well received. I was therefore pretty surprised to receive an email a few days ago taking issue with how I require the keratometry values to be entered. The calculator gives these instructions:

When I made the calculator I was pretty pleased with myself for allowing my users to simply enter a string of text, as opposed to selecting each value from separate dropdown boxes. However, to make it easier to parse the input I figured I better restrict the user to a certain format. I decided to prohibit entries like this:

Hence my instructions listed above.

Now, when I was at the Illinois College of Optometry we learned to record K's like this:

This seemed about as simple as could be - on a manual keratometer you record it like so:

After receiving the email regarding how I document K's I plunged into an abyss of self doubt. Well, that's a little melodramatic, but I did start to wonder how other people deal with recording keratometry. I took an informal poll of people I work with and the members of the Nizagara Online and OptcomList. You know what I found out? Some people actually do things differently than I do. It seems that another popular convention is to record K's like this:

Well, you know what they say: There's two types of people in this world, people like me and weirdos. Just kidding - there's more than one way to skin a cat.

The optometrist who wrote was concerned that the differences in keratometry documentation could result in errors - for example, readings would be recorded 90 off and the calculations would therefore result in lenses that induced double the cylinder instead of corrected. If this was happening I'm sure I would have heard about it, but it made me rethink how how I approached my calculators.

When I wrote these programs I spent a lot of time putting values on optical crosses because I found it was really easy to get confused. The trickiest part was keeping the axes that we use when describing a refraction separate from the meridians we use when describing keratometry. I don't want to insult anyone's intelligence, but here's a quick illustration of that concept:

Let's put these examples on an optical cross:

So, again, I would have document the K's like the first example (44/46@90) and others would have done it like the second (46/44@180). However, it really doesn't matter as long as the meridian power is identified correctly with its proper meridian.

If I enter both of these into my calculator: 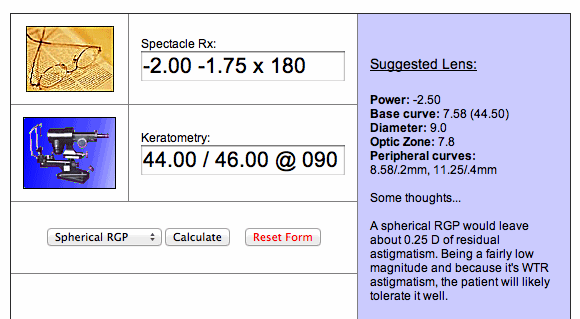 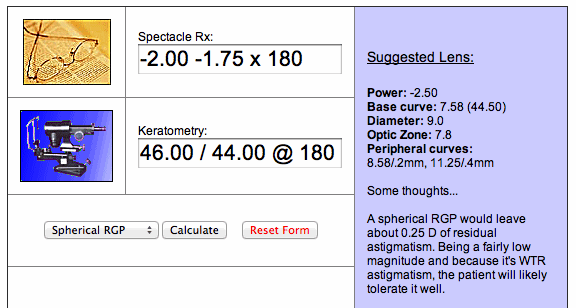 In summary, the calculator works by identifying the power of each meridian in the refraction and on the corneal curvature, and then perform the RGP calculation. Although there are differing preferences related to recording keratometry, this calculator is essentially format agnostic, as long as you use the power1 / power2 @ power2's meridian format. If you don't, well, you can't blame me for the consequences!

I'm still curious about these formats, though. I've been doing it the same way for so long, and I I've thought so hard about optical crosses while building these calculators, that I'm used to taking my measurements and making snap fitting decisions.

The people who use the other format implied that it's more intuitive, and I can see why: the axis of the refraction (listed in minus cyl format) should match the meridian that's listed for the flat keratometry reading, eg) -2.00 -1.75 x 180 and 46.00 / 44.00 @ 180. I have to admit, that's a good quick double-check that your measurements make sense. However, I refract in plus cyl so I'd still have to do things a little differently.