I don't think anyone saw this besides me and a few of my coworkers, but the earliest version of EyeDock looked something like this:

When I increased the functionality and got it looking a little prettier I decided to buy a domain. Unfortunately "eyedoc" was already taken, so I settled on "EyeDock" as the next best thing. I'm not sure this was a good choice - I've spent a lot of time telling people at conferences "It's EyeDock - with a k at the end. Don't forget the k!" To this day I wonder how many people heard about our website, went home and typed in "eyedoc" into a browser and ...didn't find us. Anyway, I tried to rationalize to myself that it was a good name, as in sure, it's a dock, a safe harbor for eye-related resources. I even tried to force this line of thinking by making a header image of an eye in a dock:

I'm sorry for that.

Actually, I think I made this header image even before the one above, but I never used it:

That's me in the picture. I guess I was going for a serious look but I think I ended up with slightly creepy instead.

I eventually settled on a smaller image of a blinking eyeball with the words "The EyeDock":

The original logo was an animated gif, but I remade it in Flash a year or two later. I really enjoyed making this one - hover over and click the image to see why!

I even got into making some seasonal logos:

I eventually reached a point where I wanted to redesign the entire website. I realized there was no way I could do this on my own and, for the first time, hired someone to help me. I found that it was really difficult to explain to a non-eye person how all the contact lens parameters fit together, and ultimately decided it would be best if I rewrote the contact lens database code myself. However, EyeDock received a much needed facelift and some great new features: 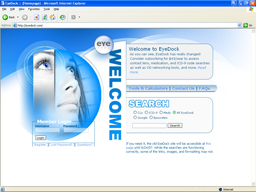 I was also particularly proud of this wintry Flash animation:

In summary, the early days of EyeDock looked a little amateurish, mostly because it was created by an amateur. Despite this I hope that most of our loyal users would vouch for it's value as a chair side reference, even in the very beginning. I'm glad the current site looks more like the professional resource that it's intended to be, but I sometimes miss the whimsy of those early days!